Portrait of an Imperial Civil Servant at The Cinquantenaire Museum, Brussels

3D
Scan The World
4,541 views 225 downloads
1 collection
Community Prints Add your picture
Be the first to share a picture of this printed object
0 comments

Portrait of an Imperial Civil Servant at The Cinquantenaire Museum, Brussels

The 3D scan has been made with photogrammetry and Memento Beta. The 3D scna has been cleaned with Netfabb and Blender.

The portrait was originally the head of a statue of man wearing a chlamys (was an ancient Greek type of rather short cloak).
The statue was a representation of a governor of a region of Carie. On the base of the statue, the curriculum vitae was written.
It was also writtent in old greek: "Christ, born from Marie, my God, save me". 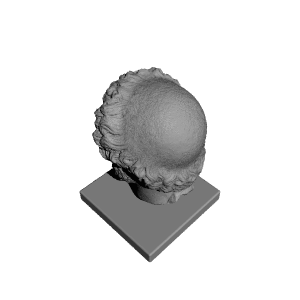 ×
1 collections where you can find Portrait of an Imperial Civil Servant at The Cinquantenaire Museum, Brussels by geoffrey.marchal