Portrait of an unknown man, maybe a young Julius Caesar?

3D
360°
Featured Scan The World
3,543 views 284 downloads
2 collections
Community Prints Add your picture
Be the first to share a picture of this printed object
0 comments

Portrait of an unknown man, maybe a young Julius Caesar?

The original marble bust can be found at the Capitoline/Chiaramonti Museum in Rome, dating from ca. 64-40 BC, at a similar time to Julius Caesar's rule. Many plaster copies were made of this work, many adding an enscription of Caesar's name to the socle - though it has not been confirmed that it is of the emperor. 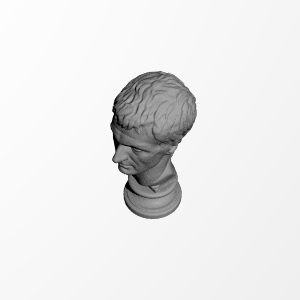 ×
2 collections where you can find Portrait of an unknown man, maybe a young Julius Caesar? by SMK - Statens Museum for Kunst