3D
Featured
5,499 views 181 downloads
1 collection
Community Prints Add your picture
Be the first to share a picture of this printed object
0 comments

This portrait of Augustus is also that of the first emperor in the history of Rome, heir and grand-nephew of Julius Cesar.

Until the end of his reign, Augustus will be represented under this same image. In the last years of his life when he is over seventy-years-old, he will still appear as a man in the prime of his life, radiating with beauty. Like a god, the emperor does not age.

The source image of the imperial portrait that the emperor diffused throughout the Empire is one identified on the statue discovered in the villa of his wife Livia in Prima Porta near Rome. The meticulously crafted hairstyle is an element that allows specialist today to compare similar portraits and define the “types” or reference model to which the creation is generally related with a specific event. For example, in Augustus’s bangs, we distinguish from left to right: two locks of hair coming from the left, an overlap formed by the crossing of the second lock with the central lock and, finally, a fork made up of the central lock and the following lock.

The date of this type of creation, supposedly from Prima Porta, should be estimated around 20 CE a few years after the Senate attributed Octavus with the name Augustus.

This prestigious title will be taken again by his successors and will finish by designating all of the emperors.

In this representation, the emperor wears an oak crown, also known as a civic crown, which symbolized supreme power. The Senate would have awarded him this crown after the battle of Actium in 31 CE, the moment of the defeat of Mark Anthony and Cleopatra and the restoration of peace. 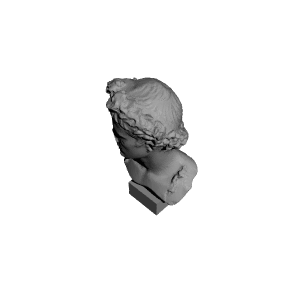 ×
1 collections where you can find Portrait of Augustus by MatMond