3D
360°
Featured Scan The World
2,685 views 183 downloads
6 collections
Community Prints Add your picture
Be the first to share a picture of this printed object
0 comments

The delicate and quattrocentesque bust depicts the Renaissance princess from Ferrara, who was betrothed at five and married at fifteen as still a child. Presumedly she is portrayed during her betrothal, because the inscription terms her daughter of Ercole d'Este. She tried to compensate for an unsatisfactory marriage by transforming Milan into a cultural centre of great distinction but her influence, like her life, was transitory.

On the bust Romano acknowledges but restrains the fussy Lombard taste in the decorative detail of the costume and head-dress. Her intricate coiffure terminates in long a braid, neatly bound with ribbons, which falls down her back like a plumb line. 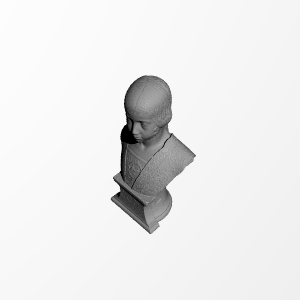