3D
Scan The World
2,082 views 48 downloads
Community Prints Add your picture
Be the first to share a picture of this printed object
0 comments

This head comes from Lower Egypt. It was brought back to France by General Charles François Joseph Dugua (1744-1802) who had acquired it during the campaign of Napoleon in Egypt (1798-1801). Maybe it was originally attached to a statue of another material (wood or stucco?). The hair is divided in the middle. A digging on the sculpture indicates that a diadem, made of another material (stucco), completed the hairstyle.

This face with its long straight nose, well-marked nostrils, in the extension of a prominent forehead, with fleshy lips sketches a rather haughty expression. This characterises that of Cleopatra V Tryphaina, wife of Ptolemy XII Aulete ("player of flute ") which reigned over the Nile countries from 80 to 58 and from 55 to 51 BC. It can be said that it resembles to the portrait of his daughter, Cleopatra VII the Great, preserved at the Altes Museum (Staatliche Museen Berlin). 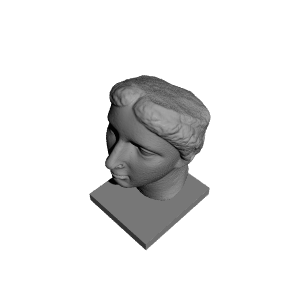