3D
360°
Featured Scan The World
3,938 views 682 downloads
9 collections
Community Prints Add your picture
Be the first to share a picture of this printed object
0 comments

This bust is of statesman and/or military General wearing the Corinthian helmet, a symbol of his military role as strategos. There are five copies and can be found at: the British Musuem, Antikensammlung in Berlin, SMK in Denmark, the Vatican Museum and Museo Barracco in Rome.

There is some confusion and dispute surrounding the identity of who this man actually is? Is his name Pericles or is it Kimon? There is also some confusion as to who his Dad was, a politician named Xanthippus or is it Miltiades the victor of the Battle of Marathon. It appears to be possible that Kimon and Pericles are separate people and were opposing politicians. Perhaps after Pericles had his opposition, Kimon, ostracized, Kimon then joined the military?

Who really knows for sure? 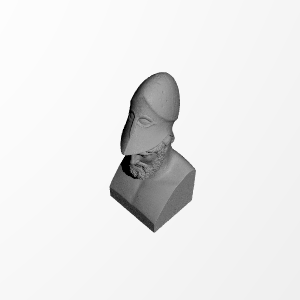