3D
Scan The World
1,960 views 78 downloads
Community Prints Add your picture
Be the first to share a picture of this printed object
0 comments

Under the reign of the Empress Anne, in 1741 he was appointed ambassador extraordinary to thecourt of Denmark and shortly after in Berlin, with Fredrick the Great.

The Count continued his career in London and attended the Congress of Aix la Chapelle between April and October 1748, where he took part in the drafting of the Treaty of Peace between theFrance of Louis XV and the maritime powers which took place on 18 October 1748 and sets theAustrian Succession, with the recognition of Silesia to Prussia, and maritime issues.

Count Peter was the father of Princess Nathalie Galitzine (1741-1837) who inspired Pushkin's storyThe Queens of Spade and the Countess Saltykoff, friend of Madame Vigee Le Brun. 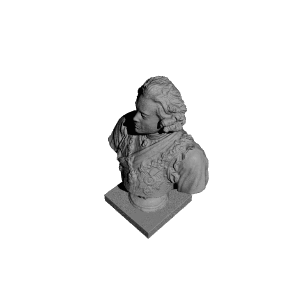