3D
Scan The World
1,224 views 41 downloads
1 collection
Community Prints Add your picture
Be the first to share a picture of this printed object
0 comments

Titus Flavius Domitianus, Roman emperor from. 69 to 79, was the last ruler of the Flavian dynasty. Analysis of ancient texts and other evidence suggests he was an aggressive builder, a micro-manager of the economy, a strict moralist and traditionalist, and a mediocre military strategist. The verdict of history has been entirely negative, often focusing on persecutions (supported only by Christian tradition) and hostile ancient histories written by members of the Roman senate, a group that Domitian generally did not trust. Consequently, it appears that, despite the significant number of extant writings, insufficient basis exists for a fair evaluation of his rule.

Comparisons with certain coins relate this portrait to AD 82.

From the Villa Borghese 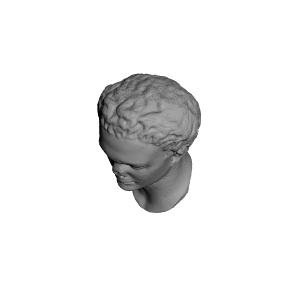