3D
360°
Featured Scan The World
2,789 views 399 downloads
4 collections
Community Prints Add your picture
Be the first to share a picture of this printed object
0 comments

This is a cast of a bust of Euripides from the Farnese collection in the National Archaeological Museum in Naples. This work gives its name to the Farnese portrait type of Euripides known from thirty or so copies. Euripides has longish, wavy hair, thinning at the front and falling in narrow locks on his high forehead. His beard is full and bushy. The playwright's gaze is cast subtly down and his nose has a prominent hump at the top of the bridge. His thin lips are pressed closed|a slight overbite is apparent. Drapery hangs from the left shoulder.

Euripides was a tragedian of classical Athens. Along with Aeschylus and Sophocles, he is one of the three ancient Greek tragedians for whom a significant number of plays have survived 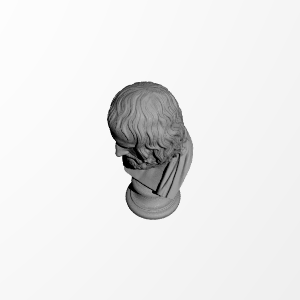 ×
4 collections where you can find Portrait of Euripedes, Farnese type by SMK - Statens Museum for Kunst