3D
Scan The World
2,174 views 76 downloads
Community Prints Add your picture
Be the first to share a picture of this printed object
0 comments

Princess Eugenia Maximilianovna of Leuchtenberg (Russian: Евгения Максимилиановна Лейхтенбергская) (1 April 1845 - 4 May 1925) was a daughter of Maximilian de Beauharnais, 3rd Duke of Leuchtenberg and his wife Grand Duchess Maria Nikolaevna of Russia. Although she was a member of the French House of Beauharnais, she was born and raised in her mother's native country, Russia.

In 1868, she married her distant cousin, Duke Alexander Petrovich of Oldenburg. The couple had an only child, Duke Peter Alexandrovich of Oldenburg. Princess Eugenia and her husband were particularly noted for their extensive philanthropy throughout Russia; so much so in fact that by 1914, a newspaper source could claim that "there [were] probably not two who are so universally beloved as the Duke and Duchess of Oldenburg". 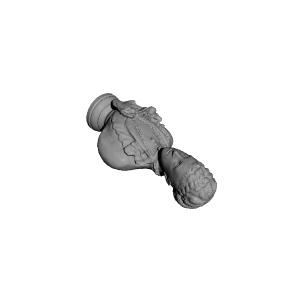 ×
0 collections where you can find Portrait of Evgeniya Oldenburgskaya at The State Russian Museum, St Petersburg by Scan The World