3D
Scan The World
1,635 views 50 downloads
Community Prints Add your picture
Be the first to share a picture of this printed object
0 comments

In this marble bust, thought for a long time to be by Antonio Rossellino and only recently included among the works by Verrocchio due to its style, the artist depicts the rich Florentine merchant dressed in antique clothes typical of Roman portraiture. At the same time he focuses on the individuality of the physiognomy, painstakinglky carving the tiniest details, such as the shadow of a beard, the deep lines on the forehead and cheeks, and very receding hairline. Moreover, apart from achieving a physical likeness in the portrait, the artist has also captured Sassetti's character in the movement of the face: his slightly frowning eyebrows and glance that reveals the colour of his pupils, render his expression extremely intense and penetrating, making this bust one of the most interesting examples of fifteenth-century portraiture. 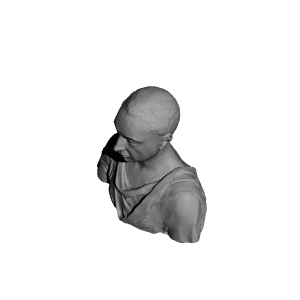