This cast originates from an original marble (ORIG2438) located at the Museo Archeological Nazionale in Naples. Of unknown origin, the portrait was acquired by the Farnese family, who first placed it at Palazzo Farnese and then at Villa Farnesina. Passed to the Bourbons by inheritance through Charles III, the portrait was transferred to Naples in 1790 and finally exhibited in the Museum. The bust, restored by C. Albacini, represents a character advanced in years and with an inspired attitude, corresponding to the canons of the reconstructive portrait of the poet Homer, which was very famous beginning from mature Hellenism and known through a very large number of copies and reproductions. The bony face with high cheekbones is furrowed by many wrinkles, the eyes are deeply sunken and open to show the blindness of the poet, whose inspired attitude is particularly highlighted by the half-open lips.

A version of this bust is featured in Rembrandt's 'Aristotle with a Bust of Homer'.

The frequent use of the drill in the working of hair and the clear separation of the hair from the face assign the portrait in question to the work of sculptors belonging to the Anthonine period and consequently date it to the third quarter of the second century AD.

The chest of the bust has been restored, though is visually very similar to the original. 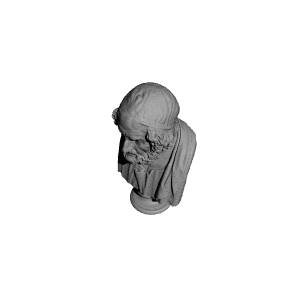