The bust is cast from one of the first studies in clay for a monument commemorating the French writer Honoré de Balzac (1799-1850), commissioned in 1891 by the Society of Writers under the presidency of Emile Zola.

Balzac had then been dead for over 40 years. Rodin attempted to overcome this difficulty by researching the writer's life and visiting the region around Tours where he had lived in order to study the local facial types. But another, and more reliable, source for this bust was a portrait of Balzac of about 1822, attributed to Achille Devéria. The spirited and free handling of the clay of the original study, retained in the bronze, together with the erect head and direct gaze of the sitter, convey the confidence and determination associated with youth. Later - and controversially - Rodin decided to represent Balzac as an older rather haggard man, over life size, and enveloped in a long, loose robe. 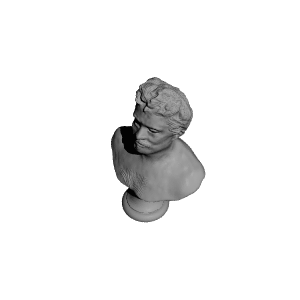