3D
Scan The World
1,769 views 51 downloads
Community Prints Add your picture
Be the first to share a picture of this printed object
0 comments

The portrait testifies to Bartolini's friendship with Ingres, which was born in Paris during the sculptor's apprenticeship at the studio of David, and consolidated for having both had a studio at the convent of the Capuchins. It is a tribute of the sculptor who was in turn depicted by his friend in 1806. The plaster seems to have been formed quickly from untreated clay, that is to say, clay that had not been previously greased or soaped, which can be deduced from the presence on the surface of air bubbles (or breezes) and several imperfections referred to as fringes or tears. 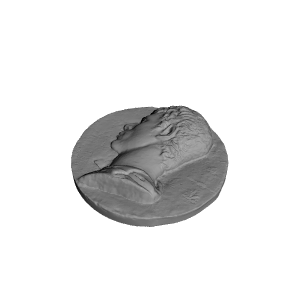