3D
Featured Scan The World
2,097 views 204 downloads
1 collection
Community Prints Add your picture
Be the first to share a picture of this printed object
0 comments

This plaster head is a reworked cast from a portrait of Julia Domna (Inv. 66058) housed at The Roman National Museum in Palazzo Massimo, Rome. Julia Domna (170-217 AD) was the wife of Septimius Severus (193-211 AD), identified by her characteristic hairstyle known as a "tartaruga". The hair is combed from a central parting on the head with successive kinks leading to the bottom of her head.

Julia was famous for her prodigious learning as well as her extraordinary political influence, and is remembered for being a patron of the arts, music, and philosophy, using her title and influence to spread the previously persecuted Philosophy and helping it improve and flourish in Rome. 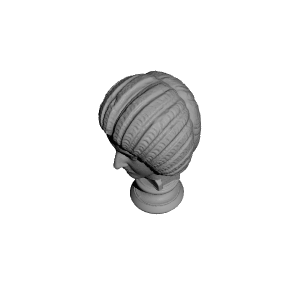