3D
Scan The World
2,485 views 158 downloads
Community Prints Add your picture
Be the first to share a picture of this printed object
0 comments

Nikolay Andreyevich Andreyev( 1873 — 24 December 1932) was a Russian sculptor, graphic artist and stage designer.  As a young man Andreyev studied with Sergey-Volnuchin and in 1902 became associated with the Peredvizhniki group of realists. Andreyev's brother V.A. Andreyev was also a sculptor. A native of Moscow, Andreyev was the designer of two Moscow statues known for their removal. One is the seated bronze figure of Gogol, with bronze friezes of Gogol's greatest characters surrounding the base, finished in 1909 and placed on Gogol Boulevard. Criticized for its impressionistic style and dark mood, said to be hated by Stalin himself, it was moved in 1952 amid controversy, and replaced with a straightforward Soviet-style representation of Gogol by sculptor Nikolai Tomsky. 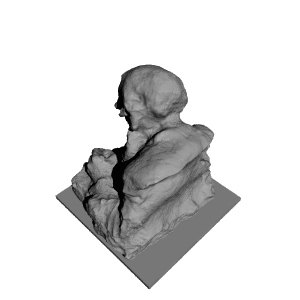