3D
Scan The World
2,181 views 178 downloads
1 collection
Community Prints Add your picture
Be the first to share a picture of this printed object
0 comments

One of the finest sculptures in the section on Lorenzo Bartolini is the 1821 full-figure portrait of countess Mariana Naryškina Gurieva, dedicated by Bartolini to his friend Ingres and carved the same year in marble (now in the Hermitage). The portrait rejects Neoclassical schemes and conveys a lively, throbbing image of the Russian noblewoman, who is swathed in a richly-draped neo-Renaissance  robe but has a casual, free pose with her head just slightly turned as if she were absorbed in following an exciting story.

The work documents one of Bartolini’s most innovative periods, when he renewed his close study and work relations with his painter friend Jean Auguste-Domnique Ingres, whom he had met two years previously at the school of David. Ingres lived in Florence from 1820 to 1824, for a long time as the guest of the sculptor before relations deteriorated because of Bartolini’s difficult behaviour. The two artists aimed at replacing Neoclassical canons of ideal beauty with a more vital, sensitive rendering of figures. This can be seen in some works done in close collaboration with each other, particularly those commissioned in 1820-21 by the Russian diplomat Count Nikolaj Gur’ev, who asked Ingres to make his portrait (an outstanding work now in the Hermitage) and Bartolini to make the portrait of his wife. The splendid plaster model in Prato bears the dedication: “Bartolini made this and dedicated it to his friend Ingres”, and shows a strongly innovative character in the countess’s uninhibited natural pose as she leans against a rock. Her vitality is accentuated by the slight twist of the head. An elegant thin neo-Renaissance robe with a fashionable plunging neckline and  rich drapery enfolds the youthful figure, emphasizing her soft, pulsating forms. 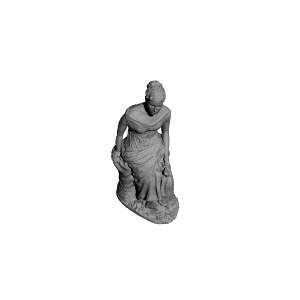 ×
1 collections where you can find Portrait of M.D. Gurieva at The State Hermitage Museum, St Petersburg by Scan The World