3D
360°
Featured Scan The World
1,916 views 181 downloads
6 collections
Community Prints Add your picture
Be the first to share a picture of this printed object
0 comments

The sitter of this bust, Niccolò di Leonardo Strozzi (1411-1469), was one of the most influential members of that large and famous Florentine family, who had become one of the principal bankers at the papal court after enjoying similar economic successes in the great commercial centres of Italy and Europe. Mino worked for the Strozzi and their circle on several occasions in both Florence and Rome.

Contemporary documents record Niccolò's obesity as well as his passion as a gourmand, characteristics that the present bust conveys, recording his features with a merciless realism but also some genuine sympathy. The bust was likely destined for Niccolò's Roman residence or perhaps the headquarters of his bank. 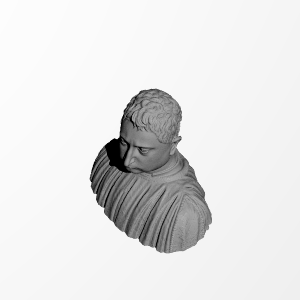