3D
360°
Featured Scan The World
4,438 views 654 downloads
9 collections
Community Prints Add your picture
Be the first to share a picture of this printed object
0 comments

Amasis, also known as Ahmose II, was the Pharaoh of ancient Egypt in the 26th Dynasty (reigned 570-562 BC, Late Period). He was a general who seized the throne during a revolt against King Apries. The account of the 5th Century Greek historian Herodotus reveals Amasis as a shrewd and opportunistic ruler who, while promoting Greek trade with Egypt, strictly regulated it.

The original granite bust, dating from the 6th Century BC, is housed in the Archaeological Museum of Florence (ORIG2413) 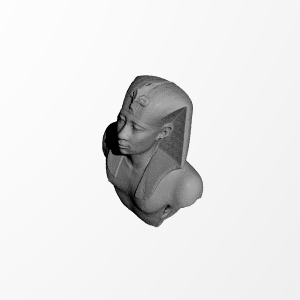