The bust of Pietro Mellini is a marble sculpture (54x60 cm) by Benedetto da Maiano , dated 1474 and preserved in the Bargello Museum in Florence.

Pietro Mellini was a rich Florentine merchant, several times prior and ally of the Medici house , who had commissioned, also from Benedetto da Maiano, also the pulpit of Santa Croce with Stories of Saint Francis . An inscription on the thickness of the marble recalls the name of the portrayed and the date 1474 .

Already belonged to Luigi Ricceri Campani, in 1825 it was bought by the Florentine Galleries (current Uffizi ) and during the nineteenth century, with the reorganization of the Medici collections, it passed to the National Museum established at the Bergello in 1865.

The bust is inspired by the ways of Antonio Rossellino and shows an old man portrayed with great meticulousness, even in the signs of age, according to that attitude to the realistic portrait that in those years also involved Domenico Ghirlandaio in painting . The expression, with tight lips and rippled forehead, betrays various emotions, ranging from a sense of skepticism to the watchful man's attention.

The dress, in fine brocatello , was treated with a virtuosistically soft modeling, where the arabesques of the decoration that sway and deform under the folds are perfectly legible. A flap of the dress is folded nonchalantly on the right shoulder.

The calibrated suspension between naturalism and composed idealisation is therefore typical of the sculptor (the references to Roman portraiture are evident ), combined with pieces of technical virtuosity that made him one of the most requested artists in the Florence of the time. 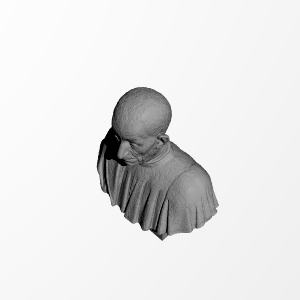