Portrait of Pompey the Great

3D
360°
Scan The World
1,576 views 89 downloads
Community Prints Add your picture
Be the first to share a picture of this printed object
0 comments

Portrait of Pompey the Great

This is a Roman bust of Pompey the Great made during the reign of Augustus (27 BC – 14 AD), a copy of an original bust from 70–60 BC. Pompey was a military and political leader of the late Roman Republic. He came from a wealthy Italian provincial background and his immense success as a general while still very young enabled him to advance directly to his first consulship without meeting the normal requirements for office. He later married the daughter of Julius Caesar, Julia, and after her death fought with her father over the rule of the Roman Republic. Pompey's loss in that dispute was a prominent element of the transformation to Roman Empire. 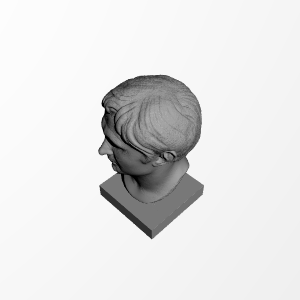