Portrait of the emperor Hadrian

3D
Scan The World
3,381 views 319 downloads
1 collection
Community Prints Add your picture
Be the first to share a picture of this printed object
0 comments

Portrait of the emperor Hadrian

Hadrian, like all Roman emperors, used statues to diffuse his image across the Roman world. Statues often showed the emperor has a general or a priest.

This bust shows Hadrian naked. This nakedness, originally a Greek style, showed that the emperor was heroic and almost god-like.

This Roman marble portrait of the emperor Hadrian (reign 117-138 AD) now in the British Museum, formerly in the collection of Charles Townley. The bust depicts the emperor unclad; the evocation of the Greek concept of "heroic nudity". Hadrian was the first emperor to show himself regularly with a beard (perhaps to reference the idea of the Greek philosopher). In the early second century sculptors also began to drill the pupils of the eyes. Previously most would have been painted on the bust. 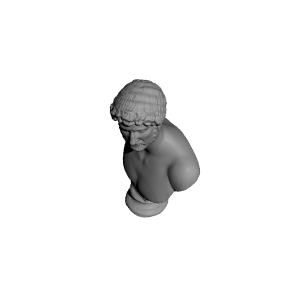