3D
Scan The World
3,027 views 106 downloads
Community Prints Add your picture
Be the first to share a picture of this printed object
0 comments

Tiberius (42 BC - 37 AD) was the son of Livia, wife of the Roman Emperor Octavian Augustus, by her first marriage. Augustus adopted him and made him his heir. When he came to power in 14 AD, Tiberius relied heavily on the Praetorian Guard to strengthen his personal influence and he began repressions against the nobility. The Roman historian Tacitus, however, recorded that during his reign "there still remained traces of the freedom which had gone". The last years of his life the Emperor spent on the island of Capri. But "neither autocracy not isolation could protect Tiberius from spiritual torments and sufferings". Tacitus's tragic image of the Emperor is not felt in the official statues raised in his honour. The Hermitage portrait head of Tiberius was intended for a large statue which was to stand in ancient Athens. The Greek master worked the surface of the marble softly, generalizing the forms, idealizing the image in the spirit of Augustan Classicism. The Emperor was always shown as a young man and it was obligatory to make him look like Augustus. But he was also like Livia with his beaked nose and the sharp outline of the chin. The Roman historian Suetonius recalled that Tiberius had "long hair on the back of his head, even covering his neck, probably a family trait" and in this portrait the wavy locks of hair fall onto the neck. Such monumentual statues of the Emperor, which combined portrait elements with generalizing features, were the visible embodiment of the power of Rome, the symbol of which was always the reigning head of state. 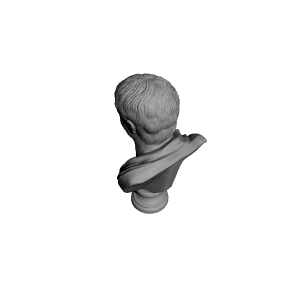 ×
0 collections where you can find Portrait of the Emperor Tiberius at The State Hermitage Museum, St Petersburg by Scan The World