Portrait of the Sophocles

3D
Scan The World
1,252 views 63 downloads
Community Prints Add your picture
Be the first to share a picture of this printed object
0 comments

Portrait of the Sophocles

Sophocles (circa 498-406 BC) is one of three ancient Greek tragedians whose plays have survived. He wrote over 120 plays during the course of his life, but only seven have survived in a complete form: Ajax, Antigone, The Women of Trachis, Oedipus Rex, Electra, Philoctetes and Oedipus at Colonus.

This is a Roman copy from the 1st century BC of a Greek original from the 4th century BC. 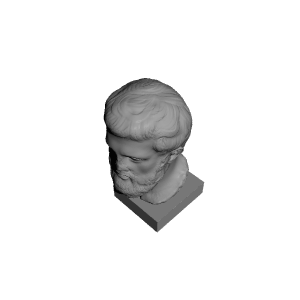