Pottery Tomb Pillar with a Squatting Guardian Figure on Top at The British Museum, London

3D
Support Free Scan The World
3,285 views 107 downloads
1 collection
Community Prints Add your picture
Be the first to share a picture of this printed object
0 comments

Pottery Tomb Pillar with a Squatting Guardian Figure on Top at The British Museum, London

Such pillars, wth or without apotropaic figures on top, were used in underground brick tombs to hold up the lintel of the doorway.

The Han dynasty was an age of economic prosperity and saw a significant growth of the money economy first established during the Zhou dynasty. The coinage issued by the central government mint in 119 BC remained the standard coinage of China until the Tang dynasty. The period saw a number of limited institutional innovations. To pay for its military campaigns and the settlement of newly conquered frontier territories, the government nationalized the private salt and iron industries in 117 BC, but these government monopolies were repealed during the Eastern Han period. Science and technology during the Han period saw significant advances, including papermaking, the nautical steering rudder, the use of negative numbers inmathematics, the raised-relief map, the hydraulic-powered armillary sphere for astronomy, and aseismometer employing an inverted pendulum.

Printed by PRINT3Dforum.com Printing Services - No support required, you can just put it to lay on the back. 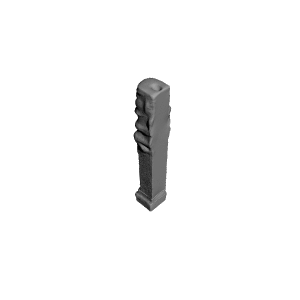 ×
1 collections where you can find Pottery Tomb Pillar with a Squatting Guardian Figure on Top at The British Museum, London by Scan The World