3D
Featured Scan The World
2,515 views 66 downloads
1 collection
Community Prints Add your picture
Be the first to share a picture of this printed object
0 comments

Plaster model of the head and face; showing deformity produced by a large fibroma of the left. Of a female aged 40 who six years previously had received a blow over the left maxillary air sinus from the head of a child. Immediately thereafter she felt the part hard and by the end of two years a definite tumour had developed and during the subsequent two years gradually increased in size. She then became pregnant and during that time the tumour enlarged rapidly. Removed by Robert Liston in 1834. 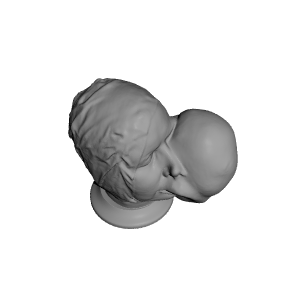