3D
Scan The World
3,591 views 274 downloads
Community Prints Add your picture
Be the first to share a picture of this printed object
0 comments

Powers portrayed President Jackson in a Greek toga, but showed his rugged features faithfully, reflecting both the fashion for classical sculpture and the American taste for an authentic likeness. He worried that Jackson looked as though he “had put his teeth aside,” but was proud to have captured the hero’s “firmness and inflexibility of character.” Jackson sat patiently for his portrait, chatting with Powers and smoking a pipe that he later gave to the sculptor as a souvenir. In 1835, when this portrait was modeled, Jackson was planning to transform Washington from a swampy town to an impressive, neoclassical capital that would reflect the nation’s ambitions. The very next year, the President laid the cornerstone for the Patent Office Building in which this sculpture appears today. 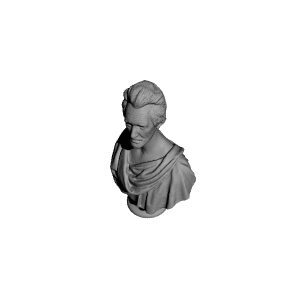 ×
0 collections where you can find President Andrew Jackson by 3DLirious