3D
Scan The World
2,350 views 155 downloads
Community Prints Add your picture
Be the first to share a picture of this printed object
0 comments

Prince Charles Joseph de Ligne (1735-1814) was a field marshal and also a famous Belgian writer of the 18th century; He was a spirited and admired soldier who traveled around Europe. He visited Catherine the Great in St. Petersburg, he was a spirited prince which was received with open arms by just about all the crowned heads of Europe Illuminated. Refined, intelligent and witty as he was, he charmed indeed throughout the Western world. Himself described the nobleman himself as "half-Germanic, Batavian, Belgian, Teutonic and barbaric", which he gave to know a European avant la lettre, whose roots are both in Beloeil layers as in Paris, Vienna and Moscow. During his numerous trips partied Charles-Joseph de Ligne not only vengeance on the loose, but he also had intense interest in the people he met. Especially minorities and women - one of his great passions - piqued his curiosity. Although he was brilliant contemporaries such as Voltaire and Rousseau admired, he hated encyclopedists and revolutionaries. Anders was said Charles-Joseph de Ligne with one foot in the Old Regime and the other in the New. He died in Vienna. 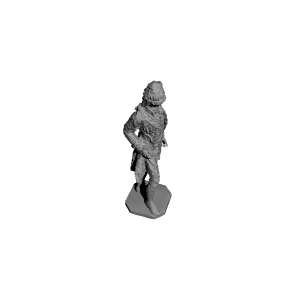 ×
0 collections where you can find Prince Charles-Joseph De Ligne in Brussels, Belgium by Scan The World