Prometheus at The Louvre, Paris

3D
Scan The World
6,974 views 971 downloads
3 collections
Community Prints Add your picture
Be the first to share a picture of this printed object
0 comments

Prometheus at The Louvre, Paris

Ancient myths and legends relate at least four versions of the narratives describing Prometheus, his exploits with Zeus, and his eternal punishment as also inflicted by Zeus. There is a single somewhat comprehensive version of the birth of Prometheus and several variant versions of his subjection to eternal suffering at the will of Zeus. The most significant narratives of his origin appear in the Theogony of Hesiod which relates Prometheus as being the son of the Titan Iapetus by Clymene, one of the Oceanids. Hesiod then presents Prometheus as subsequently being a lowly challenger to Zeus's omnipotence. In the trick at Mecone, Prometheus tricks Zeus into eternally claiming the inedible parts of cows and bulls for the sacrificial ceremonies of the gods, while conceding the nourishing parts to humans for the eternal benefit of humankind. The two remaining central episodes regarding Prometheus as written by Hesiod include his theft of fire from Olympus for the benefit of humanity against the will of Zeus, and the eternal punishment which Prometheus would endure for these acts as inflicted upon him by the judgment of Zeus. For the greater part, the pre-Athenian ancient sources are selective in which of these narrative elements they chose by their own preferences to honor and support, and which ones they chose to exclude. The specific combinations of these relatively independent narrative elements by individual ancient authors (Hesiod, Homer, Pindar, Pythagoras), and specific exclusions among them, are often influenced by the particular needs and purposes of the larger myths and legends which they are depicting. Each individual ancient author selectively preferred certain crucial stories depicting Prometheus over others.

It is in this marble sculpture by James Pradia (1790 - 1852), dated 1827, that depicts Prometheus facing eternal punishment. He is chained to a rock at the top of a mountain and has his liver eaten from his stomach by an eagle (often argued to be Zeus in disguise). As Prometheus is an immortal man he endures this permanent tortue for the rest of time.

Scan the World is a non-profit initiative introduced by MyMiniFactory, through which we are creating a digital archive of fully 3D printable sculptures, artworks and landmarks from across the globe for the public to access for free. Scan the World is an open source, community effort, if you have interesting items around you and would like to contribute, email stw@myminifactory.com to find out how you can help. 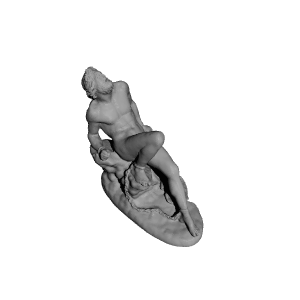 ×
3 collections where you can find Prometheus at The Louvre, Paris by Scan The World