3D
Featured Scan The World
4,108 views 419 downloads
Community Prints Add your picture
Be the first to share a picture of this printed object
0 comments

Proserpine (or Persephone) is a character from Greek mythology who was forced to spend part of every year in the underworld. Her absence from the earth was believed to cause winter, while her return brought spring. Hiram Powers modeled the original bust of Proserpine to include an elaborate woven basket filled with flowers. This proved too time-consuming and expensive to carve, however, and it was changed to a simple arrangement of acanthus leaves. Proserpine was replicated more than any other work produced by an American sculptor during the nineteenth century, and Powers’s studio carved more than three hundred copies. 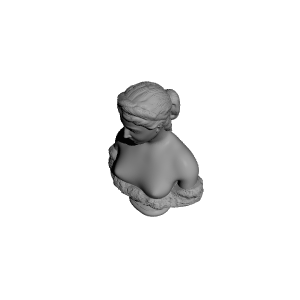 ×
0 collections where you can find Proserpine by 3DLirious