Protesilaos at The British Museum, London

3D
Scan The World
1,949 views 91 downloads
Community Prints Add your picture
Be the first to share a picture of this printed object
0 comments

Protesilaos at The British Museum, London

This marble sculpture depicts Protesilaos, the first Greek warrior to land at Troy. The sculpture is a Roman version of a Greek original from 400 BC but was discovered at Kyzikos, north west Turkey.

The figure strides along a ship's prow. The head, now lost, was helmeted at the man held a spear in his raised right arm. There is a wound in his right arm pit, just visible at the point where the arm has broken off - a reminder that Protesilaos was killed as his feet touched Asiatic soil.

In Greek mythology, Protesilaus /prɵˌtɛsɨˈleɪəs/ (Ancient Greek: Πρωτεσίλᾱος, Prōtesilāos) was a hero in the Iliad who was venerated at cult sites in Thessaly and Thrace. Protesilaus was the son of Iphicles, a "lord of many sheep"; as grandson of the eponymous Phylacos, he was the leader of the Phylaceans. Hyginus surmised that he was originally known as Iolaus—not to be confused with Iolaus, the nephew of Heracles—, but was referred to as "Protesilaus" after being the first (πρῶτος, protos) to leap ashore at Troy, and thus the first to die in the war. 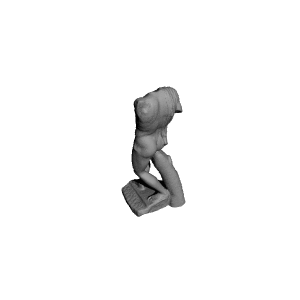 ×
0 collections where you can find Protesilaos at The British Museum, London by Scan The World