Psyche and the Zephyrs

3D
Scan The World
3,952 views 273 downloads
2 collections
Community Prints Add your picture
Be the first to share a picture of this printed object
0 comments

Psyche and the Zephyrs

A copy of a work by John Gibson executed by his 'pupil and youngest brother' Benjamin. John Gibson designed his group in 1822 for the connoisseur Sir George Beaumont and a replica was made for Prince Torlonia in 1839 (Palazzo Corsini, Rome). Benjamin Gibson made two copies of the work soon after his arrival in Rome in 1837. The present one was made for Richard Yates of Liverpool and was probably exhibited at the Liverpool Academy in 1840. It represents a passage from Apuleius' story of 'Cupid and Psyche' - Psyche's beauty has aroused the envy of the goddess Venus and she has been made a sacrifice to a monster: 'Thus poor Psyche was left alone weeping and trembling on the highest top of the rock... but then thre came a gentle air of softly breathing Zephyrs and carried her from the hill, with a meek wind, and little by little brought her down into a deep valley, where she was laid in a soft grassy bed of most sweet and fragrant flowers.' 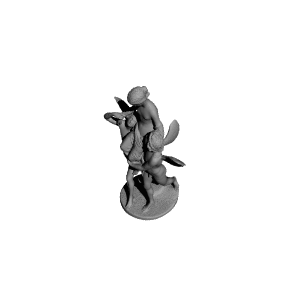