3D
Scan The World
2,551 views 192 downloads
2 collections
Community Prints Add your picture
Be the first to share a picture of this printed object
0 comments

'Psyche' was probably the single most popular subject in neo-classical sculpture. John Gibson produced numerous renderings of the story (see No. 7272), although Spence's work probably derives from Thorvaldsen's statue of 'Psyche with the jar of Beauty' (1806). It portrays the episode in Apuleius story of 'Cupid and Psyche' when Venus has set Psyche the seemingly impossible task of filling a vessel with water from the Styx, a river surrounded by impenetrable rocks and guarded by dragons, and illustrates, in a characteristically poignant image, the story's theme of trial and humility. Two versions of the work dating from the 1860s are known but the design was probably made early in Spence's career. 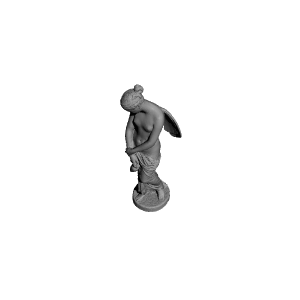