Psyche in a Faint at The State Hermitage Museum, St Petersburg

3D
Scan The World
2,915 views 142 downloads
Community Prints Add your picture
Be the first to share a picture of this printed object
0 comments

Psyche in a Faint at The State Hermitage Museum, St Petersburg

In his Metamorphoses, the Roman writer Apuleius relates how Cupid fell in love with Psyche, but his mother Venus was jealous of the girl's beauty and persecuted her. Venus sent Psyche into the Underworld for a flask containing Proserpina's beauty ointment, with strict instructions not to open it. But the girl could not contain her curiosity and opened the flask, immediately falling into a faint, or deep sleep. In developing this early work, Tenerani, a leading 19th-century Italian sculptor, sought to capture realistically the pose of the body as someone falls into a deep and sudden faint. He made several sketches, four of which remained in the sculptor's workshop and are witness to his complex search for just the right sense of movement. The graceful form, the noble and harmonious lines, the careful working of the marble surface, all inherent features of the work of Tenerani, brought this sculpture great fame, and the artist repeated the figure at least seven times. 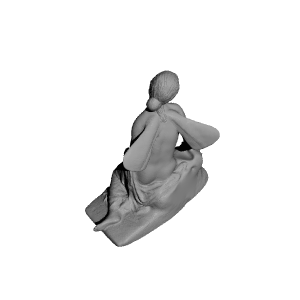 ×
0 collections where you can find Psyche in a Faint at The State Hermitage Museum, St Petersburg by Scan The World