3D
Scan The World
3,347 views 179 downloads
1 collection
Community Prints Add your picture
Be the first to share a picture of this printed object
0 comments

Ptolemy VI Philometor (Ptolemaĩos Philomḗtōr, ca. 186–145 BC) was a king of Egypt from the Ptolemaic period. He reigned from 180 to 145 BC.In 170 BC, the Seleucid king Antiochus IV began the sixth Syrian War and invaded Egypt twice. He was crowned as its king in 168. According to Livy’s The History of Rome from its Foundation (XLV.12), he abandoned his claim on the orders of theRoman Senate. Ptolemy succeeded in 180 BC at the age of about 6 and ruled jointly with his mother, Cleopatra I, until her death in 176 BC, which is what 'Philometor', his epithet, implies; "he who loves his mother", φίλος (beloved,friend) + μήτηρ (mother). The following year he married his sister, Cleopatra II, as it was customary for Pharaohs, for the Ptolemaic Greek kings had adopted many customs of the Pharaohs. He had at least four children with her: Ptolemy Eupator, Ptolemy Neos, Cleopatra Thea and Cleopatra III, and possibly Berenice.

From 169–164, Egypt was ruled by a triumvirate consisting of Ptolemy, his sister-queen and his younger brother known as Ptolemy VIII Physcon. In 164 he was driven out by his brother and went to Rome to seek support, which he received from Cato. He was restored the following year by the intervention of the Alexandrians and ruled uneasily, cruelly suppressing frequent rebellions.

Around 150 BC he recognised Alexander Balas as the Seleucid king by marrying his daughter Cleopatra Thea to him in a ceremony at Ptolemais Akko. In 145 BC, however, while Alexander was putting down a rebellion in Cilicia, Ptolemy VI invaded Syria, securing safe passage through Judaea from Alexander's vassal Jonathan Maccabee, and capturing the city of Seleucia. He remarried his daughter to Alexander's rival Demetrius II, and went to Antioch, where he crowned himself King of Asia. Alexander was defeated by Ptolemy when he returned from Cilicia with his army and fled to Arabia, where he was killed. For the first time since the death of Alexander the Great, Egypt and Syria were united. However, Ptolemy died three days later, in unknown circumstances. 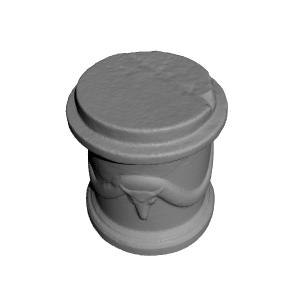 ×
1 collections where you can find Ptolemy VI Philometor at The Louvre, Paris by Scan The World