3D
Scan The World
5,717 views 461 downloads
2 collections
Community Prints Add your picture
Be the first to share a picture of this printed object
0 comments

This marble sculpture of ‘Puck’, the mischievous sprite of Shakespeare’s (1564 – 1616) ‘A Midsummer Night’s Dream’, was the American artist Harriet Hosmer’s most popular work. Hosmer was one of the most successful female artists of the 19th century. Born in Watertown, Massachusetts, in 1830, she spent most of her life living and working in Rome. There she was a leading figure in an important group of women artists who expressed their feminist and anti-slavery views in the neoclassical sculptures they produced.

Hosmer was apprenticed to the Welsh sculptor John Gibson (1790-1866), who gave her a studio at the bottom of his garden. The sculptures she made followed Gibson’s neoclassical style, but reflected her feminist views, portraying the struggle of various female figures. With a need to become financially self-sufficient to remain living and working in Rome, Hosmer knew, however, that sculptures of literary figures were often more commercially successful. She produced 30 marble replicas of the original version of her more whimsical sculpture ‘Puck’, making a profit of over 30,000 dollars. One of the replicas was even purchased in 1859 by the Prince of Wales (the future Edward VII) from his own ‘pocket money’. The commercial success of the copies allowed her to pursue more feminist and progressive themes.

The ‘sisterhood’ of women that formed around sculptor Hosmer is central to the history of art, feminism and homosexuality. This is primarily because they actively rejected heterosexual norms and the social conventions expected of women. Hosmer, for example, rejected marriage, supported herself financially, lived in romantic relationships with other women and wore masculine clothes. She shocked the local community by riding around Rome on horseback, unattended (a women of her standing would not have generally travelled unaccompanied by a man at that time). Of great significance, Hosmer also paved the way for other women to work as professional sculptors by proving that women were capable of carving marble and studying anatomy. 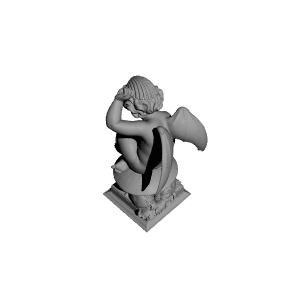 ×
2 collections where you can find Puck at The Walker Art Gallery, Birmingham by Threedscans