3D
360°
Scan The World
3,598 views 412 downloads
10 collections
Community Prints Add your picture
Be the first to share a picture of this printed object
0 comments

This is a plaster cast of a pulpit after marble original, with columns of porphyry and other stones by Giovanni Pisano (1250-1314) in Pisa about 1865.

The original pulpit was located in the right forward corner of the choir in the Cathedral, Pisa. Following a fire in the cathedral, the pulpit was dismantled in 1602. A new pulpit by Fancelli was installed in 1627, re-using some of the sculpture from the old pulpit, while the rest, including the narrative reliefs, were used elsewhere in the cathedral. Interest in the original appearance of Giovanni Pisano's pulpit was re-awakened in the nineteenth century, and a Pisan sculptor, Giovanni Fontana, began working on a reconstruction, executed in wood in 1872 and now preserved the interest of a group of British sculptors, who produced their own reconstruction by 1865, before the completion of Fontana's model and differing in detail from it.

This cast seems to be from this 1865 reconstruction, and a second copy of this cast was shown in the Exposition Universelle in Paris, in 1867. The present pulpit in the Cathedral in Pisa is a reconstruction by Peleo Bacci, executed in 1926. It differes substantially from the earlier reconstructions.

Plaster Cast of a pulpit, after the marble original with columns of porphyry and other stones, situated in the Cathedral, Pisa. The pulpit stands on a raised circular base, and has two inscriptions running around a frieze beneath the narrative reliefs and round the base itself, attesting to the authorship of Giovanni Pisano, and that the pulpit was completed by 1311. Narrative Reliefs show scenes from the life of Christ and the Last Judgement. The central support is of the three Virtues over a base depicting the Liberal Arts; the two supports nearest the front in the cast depict Christ over the Four Evangelists and Ecclesia over the four Cardinal Virtues. 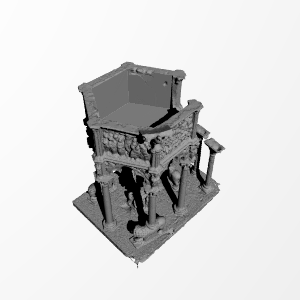 ×
10 collections where you can find Pulpit by vam