3D
Scan The World
1,419 views 97 downloads
Community Prints Add your picture
Be the first to share a picture of this printed object
0 comments

This is a marble ancient puteal with a relief depicting different scenes and characters. The puteal presents a series of seven figures of male deities, part of the Greek pantheon. Zeus, with a bearded face, half-naked, sitting to the right on a throne, with his feet on a supporter, in a pensive attitude rests an arm on the back, facing a small pillar on which is placed an eagle with spread wings, which claws lightning. Next Ares, dressed in exomis and sandals, with his head covered by the helmet, throws it in his left hand and sword with balteo in his right hand; next to him, Apollo, half-dressed, leaning with his left elbow to a pillar on which the cithara is placed, while in the right hand he holds the plectrum and to his right, on the ground, there is the omphalos, symbolic representation of the centre of the earth. Followed by Asclepius, bearded, with his right shoulder to the stick with a snake, and Dionysus, beardless, crowned with ivy, with a cloak on his left shoulder and lower body, a thyrsus in his right hand and a kantharos in his left. Then comes Heracles, beardless, with leonine skin wrapped in the left arm, while with his right hand he places the club on the ground and, finally, Hermes, with the chlamys on his left shoulder and the petaso behind his shoulders, while with his left he holds the caduceus leaning on the shoulder. This elegant sculpture, which has the shape of a well, could probably have played the role of a basin, as indicated by the closed bottom. 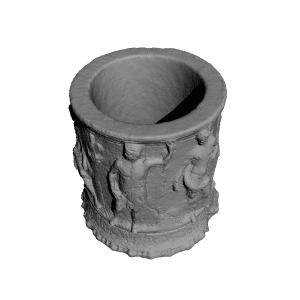