3D
360°
Featured Scan The World
12,610 views 2,190 downloads
25 collections
Community Prints Add your picture
Be the first to share a picture of this printed object
0 comments

The chubby cherubs are the models for the lantern-bearing bronze figures that still flank the stairs at the Royal Palace. They were made by Jacques-Philippe Bouchardon, who had been hired in 1741 as court sculptor for the palace works. The architect Carl Hårleman had been in Paris with his pupil Carl Johan Cronstedt in 1731-1732 to recruit skilled French craftsmen for the palace works in Stockholm. 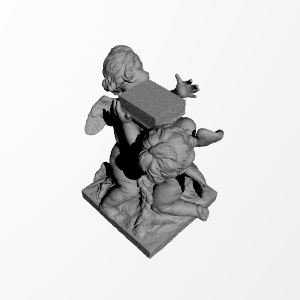