Putto With Three Tritons at The Fine Arts Museum in Brussels, Belgium

3D
Scan The World
3,845 views 256 downloads
3 collections
Community Prints Add your picture
Be the first to share a picture of this printed object
0 comments

Putto With Three Tritons at The Fine Arts Museum in Brussels, Belgium

A putto is a figure in a work of art depicted as a chubby male child, usually nude and sometimes winged. Putti are commonly confused with, yet are completely unrelated to, cherubim. In the plural, "the Cherubim" refers to the biblical angels, which have four faces of different species and several pairs of wings; they are traditionally the second order of angels. Putti are secular and represent a non-religious passion. However, in the Baroque period of art, the putto came to represent the omnipresence of God. Triton is a mythological Greek god, the messenger of the sea. He is the son of Poseidon and Amphitrite, god and goddess of the sea respectively, and is herald for his father. He is usually represented as a merman, having the upper body of a human and the tail of a fish, "sea-hued", according to Ovid "his shoulders barnacled with sea-shells". 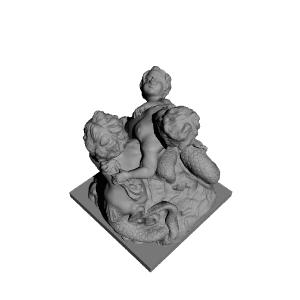 ×
3 collections where you can find Putto With Three Tritons at The Fine Arts Museum in Brussels, Belgium by Scan The World