3D
Scan The World
2,414 views 123 downloads
1 collection
Community Prints Add your picture
Be the first to share a picture of this printed object
0 comments

direct link to the object

‘Pyeonbyeong,’ or flask, is a flat bottle made by flattening the sides of a round body.‘Cheonghwabaekja’ was produced from the early 14th century in China. However, it was introduced to Korea at the end of the 14th century and produced from the middle of the 15th century. In the early stages, Korean blue and white porcelains were heavily influenced by those made in the Ming Dynasty in terms of its shape and pattern, but from the end of the 15th century, it started to show independent characteristics. Korea imported the cobalt pigment from China in the beginning, but it developed its own later on. The elegant patterns on the porcelain were loved by many people, and they show different features depending on the time they were made. From the 15th to 16th century, ume flower and birds, mountains and rivers, and autumn grass; from the 17th to 18th century, orchids, pine trees and bamboos, and plum tree and bamboos; and after the 19th century, fishes, dragons and symbols of longevity were popular. This 'pyeonbyeong has a narrow mouth, flat body and a slightly high pedestal. The frog-like handle on each side of the shoulder form symmetry. A chrysanthemum and rock are painted on the front, and a Japanese apricot tree on the back. Flowers and the rock are painted in cobalt blue, and Jinsa is added to the dot pattern of the frog, flower and apricot petals.

The 'pyeonbyeong' is replicated and made into a piece of kitchenware. The object reproduced the chrysanthemum and Japanese apricot tree on the front and back as well as frog-shaped handles. It gives a unique visual pleasure since it is difficult to find a ‘pyeonbyeong’ with a handle these days. The chrysanthemum and Japanese apricot flower painted on the jar aretwo of four gracious plants that symbolize fidelity. They remind people the value of fidelity in everyday lives. 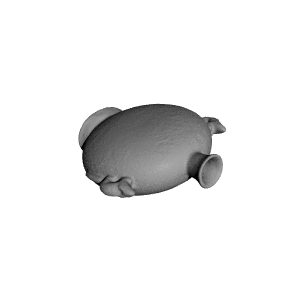