3D
Support Free Scan The World
3,384 views 157 downloads
1 collection
Community Prints Add your picture
Be the first to share a picture of this printed object
0 comments

From the 18th Dynasty onwards, mudbrick pyramids were used to mark the tombs of private individuals. These small structures were topped by a stone pyramidion. Many such pyramidia have survived, and most of them were found in Thebes (at Deir el-Medina) and Saqqara (the burial ground of the city of Memphis). They are typically decorated with solar motifs. On the front of this particular example, the deceased Ptahemwia is depicted standing in adoration. The hieroglyphic text is dedicated to Re-Horakhty and Osiris. Above the deceased, we see the jackal god Anubis. The wife of the deceased and their three children are shown standing in adoration on the right side, with two other women in the back. The left side depicts the gods Re-Horakhty and Osiris.

The pyramidion of Ptahemwia (19th Dynasty, Ramesside Period, c. 1200 BC, limestone, 28 cm wide, 42 cm tall) likewise displays sun-related scenes. The Sun God, Re-Horakhti, and the god of the Underworld, Osiris, are shown on one lateral face.

Facing the two gods, on the adjacent lateral face, is the deceased Ptahemwia, standing in an offering pose, facing three columns of hieroglyphs. 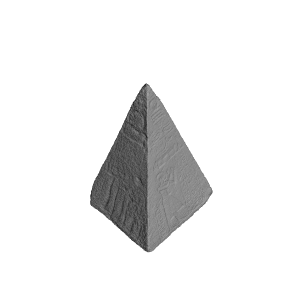