3D
Scan The World
7,383 views 602 downloads
2 collections
Community Prints Add your picture
Be the first to share a picture of this printed object
0 comments

This 20th Century life-size bust by John Hodgson depicts Queen Margaret. Margaret (of Anjou) 23 March 1430 – 25 August 1482) was the wife of King Henry VI of England. As such, she was Queen of England from 1445 to 1461 and again from 1470 to 1471. Born in the Duchy of Lorraine, into the House of Valois-Anjou, Margaret was the second eldest daughter of René I of Naples and Isabella, Duchess of Lorraine.

She was one of the principal figures in the series of dynastic civil wars known as the Wars of the Roses and at times personally led the Lancastrian faction. Due to her husband's frequent bouts of insanity, Margaret ruled the kingdom in his place. It was she who called for a Great Council in May 1455 that excluded the Yorkist faction headed by Richard, Duke of York, and thus provided the spark that ignited a civil conflict that lasted for over thirty years, decimated the old nobility of England, and caused the deaths of thousands of men, including her only son Edward of Westminster, Prince of Wales, at the Battle of Tewkesbury in 1471. 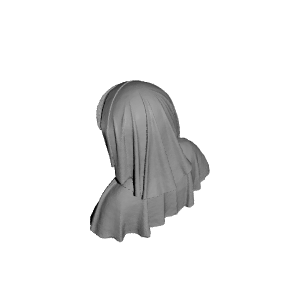 ×
2 collections where you can find Queen Margaret bust at The Collection, Lincoln, UK by Threedscans