The Jubilee bust of Queen Victoria is a sculpted bust of Queen Victoria, made as an official commemoration for her 1887 golden jubilee by the sculptor Francis John Williamson. Many copies were made and distributed throughout the British Empire. Many other busts of Victoria were carved, including others commemorating her golden and other jubilees, and these should not be confused with the Williamson Jubilee bust.

This bust is the original version of a larger full-sized sculpture of Queen Victoria, commissioned for the Diamond Jubilee in 1879 and unveiled in 1899.

Francis Williamson (17th July 1833 - 12th March 1920) was a British portrait sculptor, reputed to have been Queen Victoria's favourite. Williamson exhibited with the Royal Academy of Arts 38 times from 1853–1897. and with the Royal Birmingham Society of Artists in 1868, when he showed several items, including a medallion depicting Mrs W. Wills, 1887 and 1902. It was during his time with Foley that he first met Victoria. In 1870, she commissioned a memorial to George IV's daughter Princess Charlotte and her husband Prince Leopold (Victoria's uncle) which was erected inside their former home, Claremont. (The memorial was subsequently moved to St George's Church, Esher.) Many members of the royal family subsequently sat for him, and in 1887 he sculpted the (Golden) Jubilee bust of Queen Victoria, which was replicated for display around the British Empire. 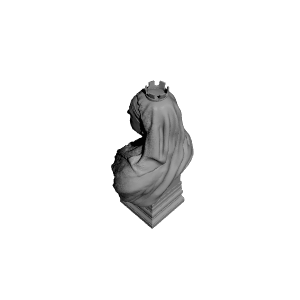 ×
2 collections where you can find Queen Victoria at The Kelvingrove Museum, Glasgow by Scan The World
×
Jay Duckworth
@jayduckworth
1
Printed on: Raise3D Pro2 Plus
Material: PLA
Posted at: 28th October 2021

Raise3D Pro 2 Plus, the print is 8.5'' tall and took 32 hours to print. I did a 12 hour test print of just the head and the detail is AMAZING. I will post more of the San The World in higher print resolution so that people can appreciate the work that they are doing to bring art to everyone. I donated $5 for this print as a thank you.