3D
Scan The World
5,895 views 553 downloads
1 collection
Community Prints Add your picture
Be the first to share a picture of this printed object
0 comments

Victoria was the daughter of Prince Edward, Duke of Kent and Strathearn, the fourth son of King George III. Both the Duke of Kent and King George III died in 1820, and Victoria was raised under close supervision by her German-born mother Princess Victoria of Saxe-Coburg-Saalfeld. She inherited the throne at the age of 18, after her father's three elder brothers had all died, leaving no legitimate, surviving children. The United Kingdom was already an established constitutional monarchy, in which the sovereign held relatively little direct political power. Privately, Victoria attempted to influence government policy and ministerial appointments. Publicly, she became a national icon, and was identified with strict standards of personal morality.

This marble bust of Queen Victoria was sculpted by Sir Francis Chantrey (1781-1841), incised and dated 1841. The sculpture in the National Portrait Gallery in London is a replica of Chantrey's bust that was presented by the Queen to Sir Robert Peel in 1846. 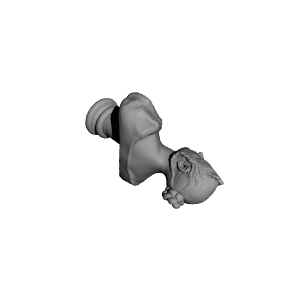 ×
1 collections where you can find Queen Victoria at The National Portrait Gallery, London by Scan The World