The sculpture belonging in 10th century discovered from Kera, Gujarat, addresses a well known sequence from the pages of Indian folklore about one of Vishnu’s avatar, Krishna. Vaishnavs remembers this reincarnation of Vishnu distinctly. These tales are the one that grandmother recites to their grandchildren and when they age they re-narrate it to their grandchildren. A fraction of this tale captured in the statuette of Kera describes the symphony of joy and liberation distributed near the bank of Yamuna. Every evening milkmaids and cowherd’s wives wait for the sound of flute that makes them lose their senses being hypnotized, dropping everything that they were doing and make them escape the dungeon of their mere duties. In this hour of redemption they are themselves along with the vast universe. Gradually, it goes other way round when they are piece of the universe and the living consciousness is Krishna. Everyone dances in circles representing the endless universe and makes gestures to channel the energy of cosmos turning themselves into a dynamic ‘mandal’. The women may be the planets, asteroids, ruthless river, blooming flower or even an atom while in the trance until the music stops and making them aware of their children, husband, burning kettle, boiling water that they left behind. They rush towards their houses and wait for the call again the following day. 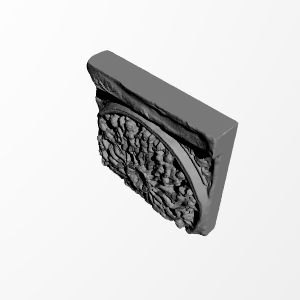