3D
2,439 views 39 downloads
Community Prints Add your picture
Be the first to share a picture of this printed object
0 comments

Got a supposedly rack-mountable computer with mounting studs that prevent it from mounting in your rack? For example, the things marked red in the second photo are supposed to hold this computer, but they don't work with the lip on our rails. The green-marked part could hold it on our rails, but again the little red studs interfere. I'm sure Dell would not approve, but you can make this simple adapter to sit the unit on the lip of standard rails.

Our racks needed 6 of this part per mounted box. They were printed in PLA at 0.25mm or 0.3mm, several shells, and at least 10% fill. Much higher fill percentage could be used, however, it doesn't seem to be necessary with the fill carefully oriented to support compressive loading. Our particular boxes are just 2u, but one box could still weigh 40 pounds, so the fill pattern we used was designed to support a 10+ pound load per part.

If the part seems tilted, that's because it is -- by 1 degree. This is to allow the thicker area under the bar (marked green in the second photo) to be covered without flexing the PLA part. The weight of the box hangs primarily off the stud and secondarily off the bar.

I suppose there is theoretically a potential problem with extreme heat build-up in the rackmount system softening the PLA parts, but the heat really shouldn't be enough to cause parts to distort. 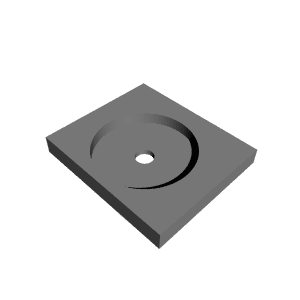