3D
Scan The World
3,511 views 223 downloads
1 collection
Community Prints Add your picture
Be the first to share a picture of this printed object
0 comments

Weighing 7.25 tons, this fragment of his statue was cut from a single block of two-coloured granite. He is shown wearing the nemes head-dress surmounted by a cobra diadem. The sculptor has used a slight variation of normal conventions to relate his work to the viewer, angling the eyes down slightly, so that the statue relates more to those looking at it. It was retrieved from the mortuary temple of Ramesses at Thebes (the 'Ramesseum') by Giovanni Belzoni in 1816. Belzoni wrote a fascinating account of his struggle to remove it, both literally, given its colossal size, and politically. The hole on the right of the torso is said to have been made by members of Napoleon's expedition to Egypt at the end of the eighteenth century, in an unsuccessful attempt to remove the statue. 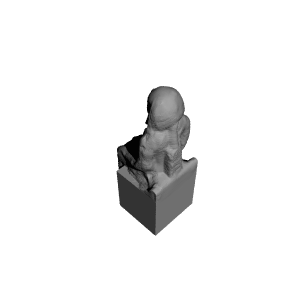 ×
1 collections where you can find Ramesses II at the British Museum, London by Scan The World