360°
4,712 views 2 downloads
6 collections
Community Prints Add your picture
Be the first to share a picture of this printed object
1 comments

As a huge fan of "Jurassic Park" and "A Land Before Time" I had to choose the Dinos Theme for the Ravensburger Competition.
Both the shows and the board game "Labyrinth" reflect similar topics like adventure, dangers and include a journey the heroes have to face, so I think it's a good fit.

The figures of a boardgame represent the players and there are many styles to play a game. I wanted to create a connection between the player and its chosen figure, so I added a little spark of these playstyles to the different designs.

Now let me introduce you ...
- T-rex: Tyro is the total opposite of what you would expect of the king of dinosaurs. He is cautious and shy would never harm someone and is living a vegan lifestyle. He just wants to have fun with his friends, who wins and who looses has no importance.
- Pteranodon: Chopper, on the other hand, is only focussed on his goal. Sometimes he loses track of what the others are doing and the game ends before he even realized it. But be careful: If he wins, he wins fast.
- Triceratops: Oscar is a socializer and loves to make deals with other players. Mostly, of course, he uses it for his advantage.
- Parasaurolophus: Daffy is thoughtful and likes to be on his own. If he is playing, he always thinks three turns ahead, which makes him a dangerous opponent. 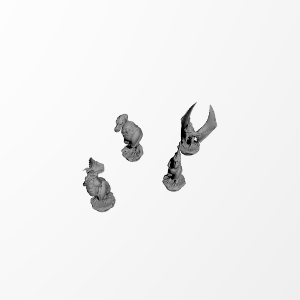 ×
6 collections where you can find RAVENSBURGER - DINOSAURS by harratus