3D
Featured Scan The World
5,447 views 420 downloads
2 collections
Community Prints Add your picture
Be the first to share a picture of this printed object
0 comments

In this sculpture the satyr Pan reclines on a rocky base amid grape clusters and vines. His left hand clutches a goatskin called a nebris that he wears around his neck. Such details, together with the small salamander carved amid the rocks, evoke a rustic scene befitting Pan, the half goat-half human god of the woods, fields, and flocks known for his lecherous pursuits. The reed pipe, or syrinx, in Pan’s right hand is an allusion to the maiden Syrinx, who was changed into a patch of reeds to escape the satyr’s advances. Francesco da Sangallo carved this sculpture from a recycled piece of ancient marble and it once served as a fountain; its water spout is still visible at the mouth of the sack above his right arm. 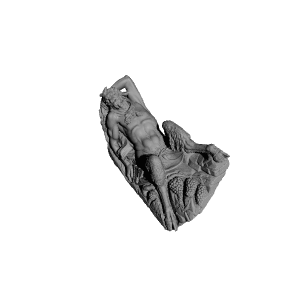 ×
2 collections where you can find Reclining Pan by Threedscans